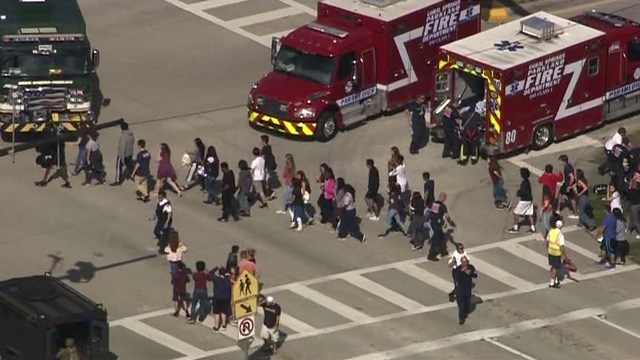 Last Wednesday began as just another day for the students at Marjory Stoneman Douglas High School. Only one of them became an overnight sensation. As we all know by now, a gunman opened fire on innocent students and staff, leaving 17 dead. And unless you knew them personally, you probably don’t remember their names. But you almost certainly know the killer’s name. How could you not, with his name splashed all over the headlines.

Quick, name one of the murder victims of Columbine? What about Sandy Hook? Mandalay Bay? Can you come up with one—just ONE—victim’s name from the increasing number of domestic massacres from the last 10–15 years? OK, how about the killers? Chances are you can come up with at least some of their names. The victims are identified, and then get lumped in with all the rest. Other than by their families and friends, they soon become forgotten. No one else remembers them. But their killers, they stay in the news long after the carnage is over. The killer in Florida, in one afternoon, went from obscurity to infamy. You know him now. Just like that. He woke up Wednesday morning a loser, and went to bed a media star. This zero wanted to make a name for himself, and he knew the formula. Shoot up a school, get instant recognition. But you won’t see his name here, which is my point.

Don’t reveal the killers’ names, at least not in headlines. Don’t show their faces either.

By giving them the star treatment, the killers get exactly what they want—attention.

It used to be you achieved fame by possessing a talent. In this Kardashian era, that’s no longer the case. You just have to do something outrageous. Shoot a sex tape or shoot up a school. Either way, they’ll get the attention they crave. The coverage becomes an All You Wanted to Know about This Loony But Were Afraid To Ask. The wall-to-wall media coverage only encourages other social outcasts who are teetering on the edge to go that final, deadly step. These pathetic clowns believe they are entitled to their 15 minutes, and they’ll do whatever it takes to get their Look at Me moment—even commit cold-blooded murder.

And the media plays right into their hands. With their faces plastered all over the screen, and their names in big, bold letters right next to their bio, they are now starring in their own made-for-TV movie. Heretofore losers, they are now relevant, important.

The media become publicity firms for these evil bastards, their breathless coverage smacking of a fan club. See where the mass murderer grew up. Meet his family and friends. Find out what his neighbors say about this quiet boy…. If he doesn’t pull the trigger, he gets none of this. He goes on with his pathetic life in obscurity. But that’s the media’s MO—perform a savage act, get top billing.

By covering these monsters the way TMZ covers Justin Bieber, they are glorifying evil. The murderers accomplished in death what they couldn’t hack in life. And some other loser in his parents’ basement sees this and thinks, Is that all it takes? Hell, I can do that. And a copycat is born.

The media should exercise restraint. How? By not rewarding depravity. How about not repeating the killers’ names every seven seconds. Maybe forgoing the Brad Pitt-like photo spread. Skip the cradle to grave biography and the armchair psychoanalyses as to what drove this loon to inflict all this carnage. Basically, stop treating killers as if they’re movie stars.

No, I am not calling for censorship. This information should still be made available to the public, and a simple Google search can accomplish that in five seconds. But how about if the cable channels had a policy of not showing the names and faces of these killers, and instead directing them to their websites. Newspapers can leave them off their front pages, putting them on the inside instead. And certainly don’t do as Time magazine did when they put the Oklahoma City bomber on their cover.

There’s talk now about what can prevent this from happening again. Installing metal detectors. Hiring security guards. Increasing funding for mental healthcare. Even arming teachers. All these ideas have been floated and are worthy of discussion.

So, too, should the idea of the media exercising more caution in their coverage by reporting the facts without glamorizing malevolent behavior. If the next would-be killer knows he won’t become notorious, then maybe, just maybe, he will have lost his incentive to carry out another atrocity.