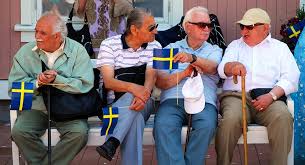 Yesterday I left the hair salon hating myself. Not because I was unhappy with my haircut; in fact, I never even sat in a chair. That awful feeling I felt was the result of my reason for leaving the salon.

This place is nothing fancy, just some local strip mall salon that I’ve been going to for years. It usually has the same crew working, all ladies in their 20s and 30s. But yesterday there was a new stylist. She was working slower than the other gals, very deliberately, seemingly worried about making a mistake, which is understandable when you’re new at a position. But she stood out for another reason. She was…old.

As I sat in the lobby watching her fumble with her scissors, squint at the cranium in front of her, and struggle installing a new clip on the hair clipper, I felt sympathy for the woman. She was obviously not yet comfortable in her new environment, and I bet she knew others were watching her. As she was finishing up with her current customer, I realized I was the next one in the queue. And then it hit me: I didn’t want this old lady cutting my hair. So I got up and left, feeling appalled and ashamed. As well I should have.

And my conscience let me have it.

Who the hell are you, that you don’t want a senior cutting your hair? It has to be someone young who fits the part? You taken a look at yourself lately? You ain’t exactly Justin Timberlake, you know. For god’s sake, you yourself are on the back nine of life. You’re in no position to play the ageist. Do you realize that this woman is closer to your age than the ones you’re used to cutting your hair? How dare you pass judgment on her? She was already feeling self-conscious being in a work environment with colleagues young enough to be her daughters. And your leaving only made her that much less confident in herself. As (wife) Janet always says, “There but for the grace of God go I.” How would you like it if someone saw you and said, “I don’t want deal with that geezer”? You had the opportunity to do some good by making this woman feel a little better about herself, and you chose instead to go with your ego. Shame on you!

And on and on the self-abuse went.

We have an ever-elusive quest to find the Fountain of Youth, and salons are there to cater to people’s vanities, whether it’s in the form of a coif, waxing, nail services, or even tattoos. (Not long ago it was rare to see a tatted-up woman. Now they’re everywhere.) When we go to these salons, it’s with the intention to look better and feel better. Or as in my case, to delude myself that I’m still young and handsome. Seeing that woman hair stylist was a reminder that my best days are in the rear-view mirror, and that kind of spooked me. It was easier to just get up and leave than to face reality.

It should come as no surprise to see someone middle-aged doing a service job. The stories are everywhere about Baby Boomers not having enough savings to sustain them through retirement. What are they supposed to do when Social Security is not enough and their careers have put them out to pasture? They have to take whatever’s available, and that often means taking jobs that require interacting with the public, whether it’s at a supermarket, convenience store, or even a hair salon.

In today’s fast-paced society, sometimes those long in the tooth struggle keeping up with the latest technology. And when seniors and technology collide, that can be frustrating to the I-want-it-done-now consumer. Next time you see some Aunt Bee in a grocery checkout line paying with a check, look at the faces standing in line and see if they’re rolling their eyes. I bet she still uses a rotary phone too. I know when I first taught my mother how to use her new iPhone, it would have tested Job’s patience. Teaching my late mother-in-law how to use a computer was an exercise in futility. Whatever the reason for their entry or re-entry into the labor force—retirement shortfall, catastrophic illness—senior participation has smashed the old notion of the service industry worker.

Some positions for those in their golden years have been with us for so long that we’ve become accustomed to them. The “Welcome to Walmart” greeting from the silver-haired retiree is cliché. The guy at Home Depot helping you pick out plywood or choose a bathroom fixture is more often than not someone in a second career. We don’t even notice anymore.

Other situations sometimes cause us to pause and reflect. Recently my wife and I had dinner at “Olive Garden.” Our server’s name was Gladys, and she caught my attention. Why? Because she was the only member of the serving staff who was AARP-eligible. We associate “Olive Garden” with a young, hip crowd, and their servers to be named Amber, Ava, Mason, or Aidan. Why was Gladys working there, I wondered, with “kids” from the next generation? Probably for the same reason most of us work: survival.
She was sprightly, smiling, and damn if she wasn’t giving us great service. And if she felt out of place, she sure didn’t show it. Good for her. And bad for me and my thought process for even stopping to ponder.

I’m looking forward to retirement. Someday. It would be nice to have the time to travel, visit people, and do the things I haven’t had time to do while in my working years. I sure hope that when I retire—or my job retires me—that I don’t have to go back into the labor force. What I hope even more is that if I do find myself slinging Grand Slam Breakfasts or filling Chalupas because I’m having trouble paying the electric bill, that some whippersnapper doesn’t look at me and wonder, “How sad that you have to do this, pops.”

As for that local hair salon, I’m going back. And this time I’ll let whoever’s available take me. In fact, I hope it’s that woman I shunned. Yes, part of it is to ease my guilty conscience. But also because it’s the right thing to do.